It’s that time of year when students in their last year of school start to receive offers for their further eduction, and we’re delighted to hear that, yet again, DYJO players have received great offers to further their musical studies! Robyn (sax) is set to study Music at Birmingham University, Emma (sax) Pop or Jazz at Leeds College of Music, Matt (bass) Jazz at Birmingham Conservatoire, and Joe (trombone) Jazz at Trinity Laban or Birmingham Conservatoire.

We are, of course, thoroughly delighted to celebrate their successes, and wish them well for their futures! In the meantime, they’ve got a busy programme of gigs with DYJO to play, and the little matter of a tour to the jazz festivals of Vienne and Montreux in the summer… 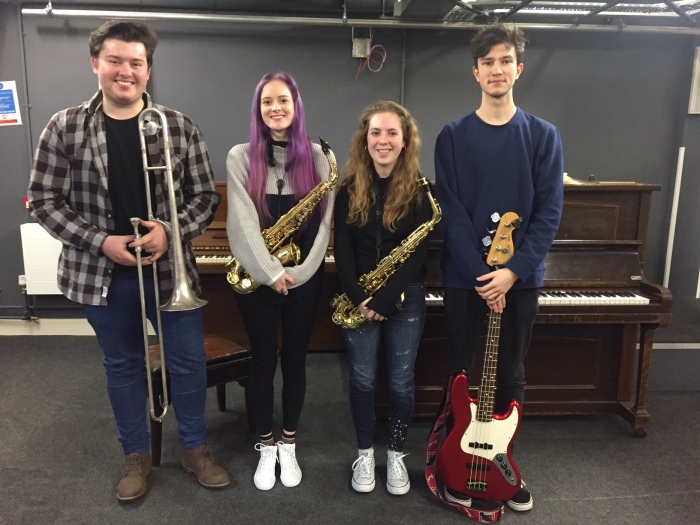 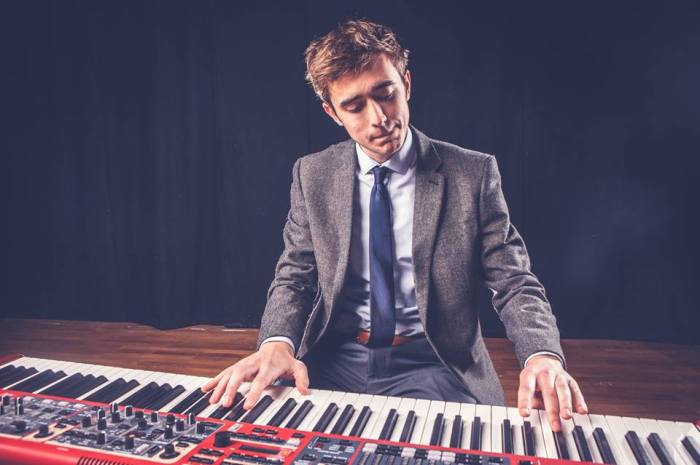 Just before Christmas, DYJO’s very own rhythm section tutor, Matt Carter, announced that he’d gained a place to study on the BMus Jazz course at the Royal Academy of Music starting next September! It’s incredibly hard to gain a place there: each year there is just one pianist selected for the course, so Matt will not only be surrounded by the absolutely best young jazz musicians you can imagine, but he’ll be receiving tutoring from the country’s top jazz musicians and teachers.

Already a skilled pianist, Matt started in DYJO2 with me what feels like an age ago, and soon progressed to DYJO1, playing both piano and trumpet. In 2011, while in DYJO, he travelled to London to play at the Will Michael Jazz Education Awards, at which Devon was awarded a Diploma of Special Merit: that year the awards were presented at the Royal Academy of Music, and Matt played a solo set on one of their Steinways to the great and the good who were assembled, later hearing a performance from some of the undergraduates.

After leaving DYJO and college, with his superb keyboard skills, Matt quickly picked up a lot of regular gigs and started a busy life as a working musician, and this year we’ve been delighted to welcome him on board the DYJO tutor team to share his skills with the next generation of jazz musicians. But like any great musician, Matt is on a constant quest to learn more. Over to Matt:

“I decided to apply again to study at the Royal Academy to try and take the next step to develop myself as a musician. I have been extremely fortunate to have had a lot of performance opportunities whilst living in Exeter, but I have always wondered what would happen if I pushed myself to try and make the move to living in London. Moving with no real opportunities already organised would be difficult, so I decided I may as well apply to The Academy. That way I would automatically be linked up with a pool of musicians and studying there, not to mention the great teachers and the degree at the end of it! I am excited by the prospect of studying with an ensemble of talented musicians that all have similar goals with music that I have. I will be moving there but I still intend to keep connections with the South West by regularly coming back to gig, as well as continuing to be a tutor with DYJO!

The Royal Academy has always appealed to me, as they only take on a small number of musicians per year. I will be the only piano player in my year, and there are only generally one of each instrument commonly found in a big band. That means there will be a lot of time to get to know all of the other students, socially as well as musically, and to develop our musicianship together. The course is four years long, and in that time I hope to get stuck into the music scene in London as well as developing my own personal style.”

It’s incredibly exciting for us at DYJO to look forward to how Matt’s playing will develop with his intensive exposure to absolutely the best jazz education in the country – though I dare say that our excitement is a mere fraction of the excitement that Matt is feeling right now!