You’ll probably have gathered that we have two fully functioning bands already this season. But as we like to give as many young musicians as possible the chance to learn with us, we’d still like to hear from any young tenor sax players, trumpeters and reading drummers who would be interested in trying us out. There’s more info at http://dyjo.org/joinus.html.

Anyone joining us would have as exciting a season with is as it’s possible to imagine: as well as many prestigious appearances throughout Devon, this year, of course, we’ll be playing at two of the world’s best jazz festivals (Vienne and Montreux) in July!

Do email us at mail@dyjo.org if you’d like to know more!

What a whirlwind of a last day at Heatree! The day began with a superb workshop on Lindy Hop, the dance that grew out of jazz and swing of the 1920s and 30s. Duncan and Louise of Mad About Swing delivered two excellently paced sessions, with each band playing while the other band learnt a sequence of steps. I didn’t seem to be much better at this than I was at tap dancing, so maybe I’ll stick to playing the trumpet and riding my bike. But it was still fun! From a musician’s point of view, the links between the dance steps and music were absolutely fascinating!

After afternoon rehearsals, we got ourselves ready for the early evening giglette for parents. A packed room heard both bands show off what they’d been working on. Though only a small sample of the residential’s work, both bands presented a wide range of styles with aplomb, and we heard solos from numerous confident young musicians.

I think everyone went home with a smile on their face – I certainly did! Massive thanks to everyone, especially the DYJO Association and pastoral carers, without whom this would have been impossible! And of course to parents and players -they just make it so much fun, and so rewarding!

More news about forthcoming events soon, including our first major gig of the season, at the Teignmouth Jazz Festival.

And now, I think we all need a bit of a lie down!

(If you’re wondering about the last photo, I had a brief escape on the bike into the beauty of Dartmoor, to recover from the trauma of my Lindy Hop… the photo is from the road to Widecombe. It reminds me of one reason that Heatree is such a special place.)

Phew, coming to the end of a second action-packed day! We started with our ‘Learning Thing’, where the bands are mixed up, and have 75 minutes to learn a brand new chart, without our assistance. Yet again the did a great job, with the band ‘Derek’ narrowly winning the prize.

Then more full and sectional rehearsals, with detailed work on repertoire for the Teignmouth Jazz Festival, and solos clinics.

Next up was a carousel of rhythm and pitch activities. And then, after another splendid meal, the traditional jazz jam, giving anyone who wants to play a tune and solo the chance to play to an audience of supportive friends. 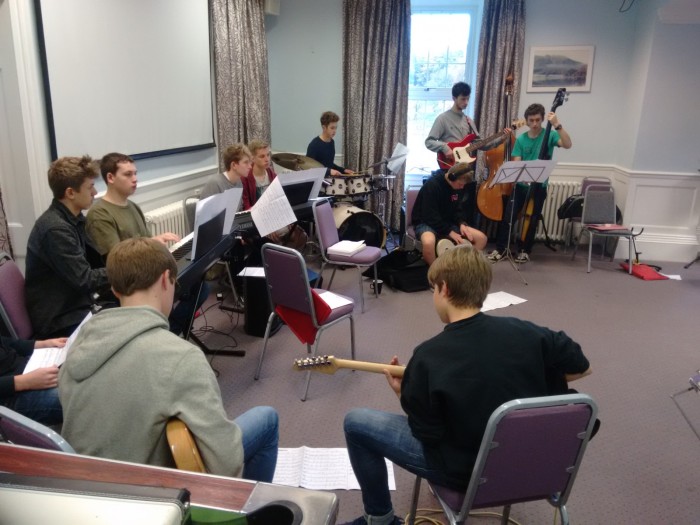 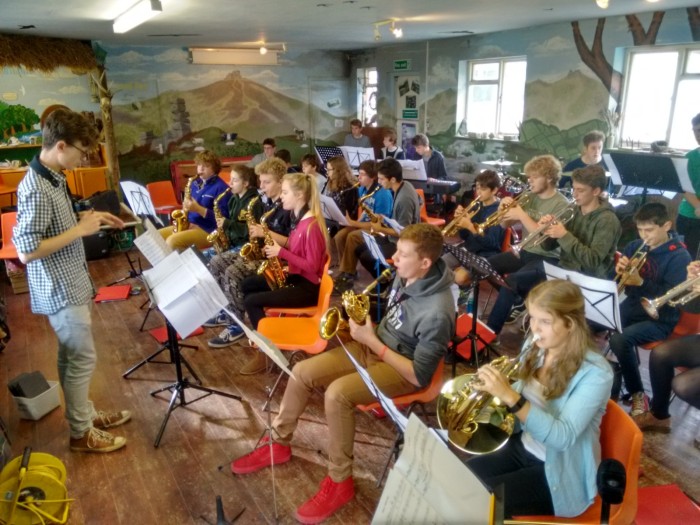 Here we are again, at the wonderful Heatree Activity Centre, at the end of our first (exhausting) day of our three-day 2016 residential. The day whizzed by with a mixture of intensive full and sectional rehearsals, followed by energetic activities (table tennis and basket ball). And before bed, a film.

More news tomorrow, but for now, Tim and his clipboard, from this morning’s registration… well, as sure as the sun will rise each morning… 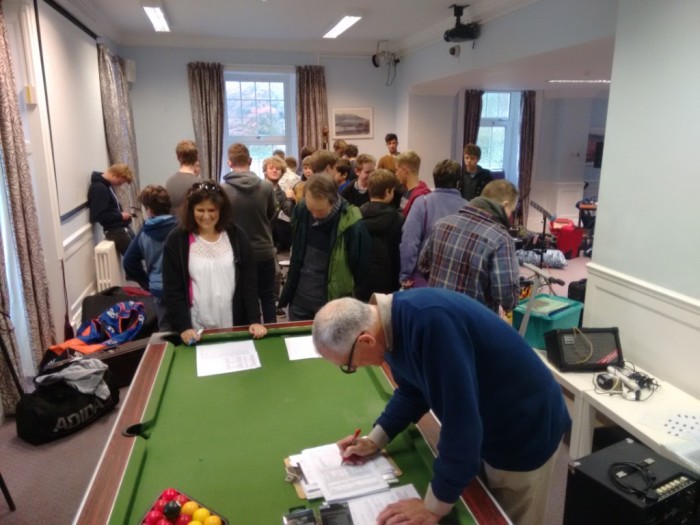 September is always an exciting month, when we welcome many new young musicians to the DYJO fold: it’s good to report that we had an extremely healthy turn-out again this year, and most have been able to accept our invitations to join the band. There is still small handful of vacancies (email mail@dyjo.org for details), but both bands are fully functional for what promises to be a jam-packed year of excitement.

As well as having many concerts lined up throughout Devon, it’s splendid to report that our plans for a foreign tour in 2017 are bearing fruit, and we can confirm that DYJO has been invited to play at both the Vienne Jazz Festival on Monday and Tuesday 10 & 11 July and the Montreux Jazz Festival on Sunday 9 July. And as well as playing at Vienne, the great news is that we’ll get passes to see the fabulous international jazz acts in the stunning Roman amphitheatre in Vienne.

Our next Gathering Day is on Saturday 15 October: it’s doubly exciting that the music we’re learning and playing will be heard at two of the world’s most famous jazz festivals!

In the meantime, here’s a picture of the main stage at Vienne (photo credit Pierre Corvaisier):

The National Youth Jazz Collective, the brainchild of Issie Barratt, is celebrating its tenth birthday this year, and goes from strength to strength.  Its summer schools form an important part of its programme, and in the past now-DYJO-alumni Stephanie Wills, Ben Lee, Matt Carter and Raddon Stephenson have all benefited from its inspirational learning environment, and its world-class jazz educators.

This year was a record one for DYJO players’ participation – no less than five players passed the demanding auditions in Exeter for the short and long courses, held in Uppingham in Leicestershire in August. Below are reflections on their experiences of two of these young musicians. For Will it was his first time with NYJC, and Kai his second, having attended the short course last year. From DYJO’s perspective, NYJC’s Summer School provides a superb place to stretch our players: given our limited time and the number of players DYJO has (up to sixty spread over the two bands), it is wonderful to see some of them given the time and specialist attention to really extend their jazz skills and soloing voices. And of course, it is a pure joy to hear some of what they’ve learnt and future development long after they’ve been to NYJC’s transformational Summer School.

“The evening jam sessions were great fun, both as a spectator and participant – everyone was given a chance to do what they liked whether it be serious or not quite so serious. We were joined by different tutors who would take the sessions each evening and got to see them get involved too! It was amazing and rewarding being congratulated on solos by top musicians my age and the tutors too.

Really got to improve working in a small group. You can imagine the problems that arise from a small group of very large personalities in cases, and it was great to see us progress past them to the final product of the performance at the end of the week.

Confidence was my main problem for the first few days, as I felt I’d been dropped right in the deep end, but by the middle of the week everyone felt comfortable and settled in.

‘Wow’ moment has to be watching Group No. 1 performing, watching a group of people you’ve been around in the week bursting with energy and talent and completely in their element.

You discover lots of new artists and bands from chatting with people about the kind of music they’re into.” 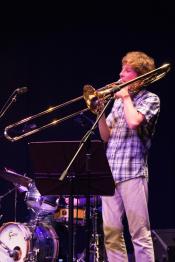 “I spent 2 amazing years with DYJO 1 and learned so much. It’s hard to put in to words how valuable the experience has been. I developed as a player and grew in confidence as a person. I learned lots of new material and how to work in a big band situation. DYJO also gave me incredible opportunities such as introducing me to the National Youth Jazz Collective Summer School and helping me very generously with funding for the course.

This summer I attended the NYJC Summer School, having been on the Short Course in 2015. I found myself working with some of the most incredible musicians I have ever worked with, and was mentored by professionals such as Mark Mondesir and Dave Holland. As a result of attending NYJC I was invited to the Royal Academy of Music to drop in on the Junior Jazz course and also to audition for the National Youth Jazz Orchestra. I have now started attending the Junior Royal Academy. I was overwhelmed by the atmosphere of RAM and the incredible people within it. I have now been asked to start two new bands with members of the JRAM that I met on the NYJC this year. I will also be auditioning for the NYJO Big Band in November.

So many opportunities were given to me by DYJO and I will always be eternally grateful for what Graham, Brian and the DYJO family have given me. I will always be a part of the organisation in one way or another and I look forward to seeing what the bands create in the coming years.”

(Photos courtesy of Melody and Ian McLaren and NYJC)